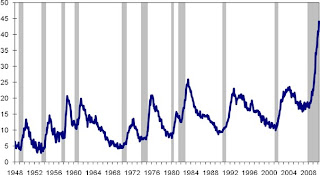 The most dangerous words on Wall Street are “It’s different this time”. Take a look at this chart of the long-term unemployed, which is 27 weeks or more, as a percent of the total unemployed. Almost 45% of the unemployed have been out-of-work over six months, which is the highest percentage since the government began compiling this data. It is not just a little worse! This does not include people just entering the workforce like students, nor part-timers, nor those who have given up, nor the short-term unemployed, all of whom are usually the vast majority of unemployed. Because workers have usually taken on more financial obligations than others, the financial consequences of this graph becomes even more worrisome.