The scientific term for the stock market during May was . . . lousy. The S&P was down 8.2%, the worst month of May since 1940, when it dropped over 20%. Of course, it was reminiscent of September in 2008, following the collapse of Lehman, there are differences. The U.S. economy is now rebounding nicely. Take a look at this chart on S&P profits: 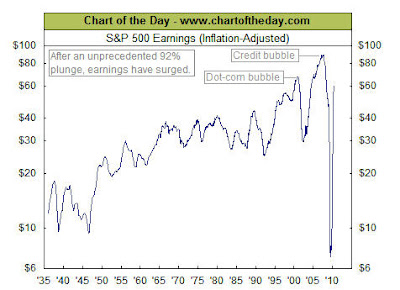 Plus, I suspect investor sentiment is heavily influenced by two other events. First, many investors were terrified by the “flash crash” on May 6th ,when the Dow briefly dropped 9.2% for a few minutes before recovering most of that loss. On May 28th, there was an even worse “flash crash”. Of course, that was in 1962. Since that time, the market continued to improve nicely. Fear is paralyzing. Hint: Think Long Term!

Second, I think the emotional impact of the BP oil spill should not be quickly dismissed, as it is creating a general malaise over the country. The heavy drumbeat of bad news is taking a toll on us. Remember: Think Long Term!