It is widely assumed that the Fed will continue raising interest rates, and they will.  They want to “normalize” the level of interest rates, as well as having some “dry powder” in case the economy stumbles and needs lower rates.  Plus, they believe higher rates will encourage increased savings.

There is also a technical reason to believe interest rates will increase.  Now, take a look at this graph: 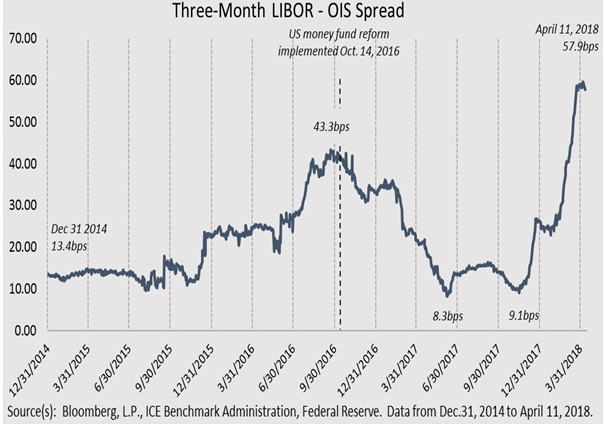 Without getting too technical, the London-Interbank-Offered-Rate (LIBOR) is unusually higher than the Fed Funds rates.  That means the spread between the two rates is too large.  Stated differently, That also means that the Fed Funds rate is too low, relative to LIBOR.  With the flood of U.S. Treasury debt now in the pipeline, from the 2018 tax cut, those new bonds will not sell nor be absorbed into the bond market without an increase in the rates they pay, which decreases the spread between the two rates.
Yes, higher rates are coming.
But, I suspect the fear of higher interest rates is unreasonably high, as the Fed will not raise rates too much too fast.  First, real estate developers hate higher rates, as that drives down real estate values (study “cap rates”).  Ask our President about that one.  Second, every percentage point increase in interest rates increases our annual debt service expense by $200 billion.  Do the math — 1% on $20 TRILLION of national debt.  Imagine creating a new annual expense that large without Congressional approval.  Lastly, the stock market doesn’t do well when interest rates increase too much.
The future of interest rates is obvious . . . but it is not scary.