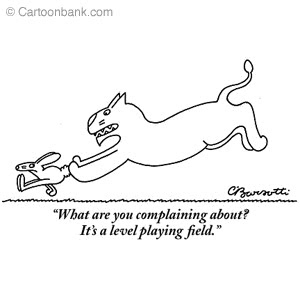 Nobody likes to think the odds are stacked against them unfairly. As long as man is either greedy or simply competitive, people will look for an advantage, fair or unfair. Newspapers routinely report on businessmen being indicted for one reason or another. No business is untouched, from developers, realtors, lenders, or even lawyers. As a result, we have learned to be careful who we do business with, but we continue to do business, knowing the crooks represent only that small portion of the business world that unfortunately gets so much media attention.

On May 6th, the stock market experienced a “flash crash”, which means it suddenly dropped precipitously before recovering. Two weeks later, we’re still trying to figure out why this happened, although it is pretty clear that it had something to do with computer routing, not any stealth attack or market manipulation. In addition, there has been much discussion since then about “high-frequency trading” and “black pools” or other sinister sounding things. So, is the stock market rigged by the smart insiders to rip off the average small investor?

Absolutely, there are smart traders who exploit any advantage to make money! There have always been people in the market like that. This is nothing new. Nonetheless, great fortunes have been made in the stock market and will continue to be made. Countless retirements are secured by the stock market.

Warren Buffett has always said he knows where the market will be in 10 years – up—but has no idea where it will be tomorrow. If you have a short-term focus, you will have many sleepless nights. But, I don’t think Warren Buffett has any trouble sleeping at night.

After the huge bull run following the March 9th low of last year, the market was already due for a correction of 10% or so. Markets do that! While it is unfortunate that our bear market correction happens to coincide with the European crisis, this too shall pass.