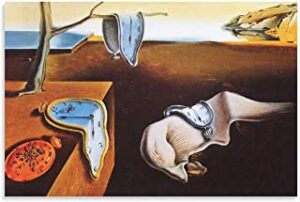 For twenty years, I have remembered September 11th as the day when I watched the Pentagon burning from my fifth floor office, as the wind pushed the smoke into my wife’s office on the Potomac.  Including the World Trade Center, 2,996 Americans died that day.

For eighty years, elderly Americans have remembered the sneak attack on Pearl Harbor on December 7, 1941, when 2,403 Americans died.

Sometimes, I feel guilty for “ignoring” Pearl Harbor.  The number of people who remember the Pearl Harbor attack decreases every day.

At some point, there will be fewer Americans who remember September 11th

That makes me sad!

In 1931, the famous surrealistic painter known as Salvador Dali completed his iconic “Persistence of Memory” which depicted memories as limp, lifeless clocks, scattered across an alien landscape, like dead soldiers after a battle.

Maybe, each generation is entitled to its own horrific memory, which will die with them?