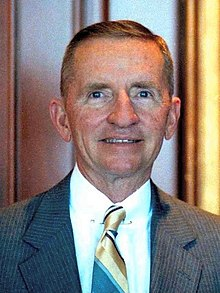 Ross Perot was a HIGHLY-opinionated Naval Academy graduate and Dallas billionaire when he ran for President in 1962 and has been credited with the election of Bill Clinton, by draining Republican votes from the incumbent President George Bush.  I watched one evening as he was arriving for a political rally and could see that he was visibly annoyed by the swarm of noisy reporters, pelting him with what he regarded as stupid questions.

When one shouted “Ross, what do you think about abortion?”  He stopped and glared at the reporter before saying “Why would you ask me that?  Do I look like a woman to you?  Go . . . go ask my wife!”