Back during the 1980’s, I was a vice president with New York-based Citicorp, primarily lending for large commercial construction projects in Texas, whose economy was booming at the time.  I’m proud to have financed construction of the iconic Infomart with $92 million of strip-funded eurodollars (see pic), as well as the very first Wyndam Hotel.  There was so much construction that we joked the official state bird of Texas was the crane . . . as in the many construction cranes above downtown.  Of course, such hubris almost always ends badly, with overbuilt markets and falling prices, as it did in Texas. 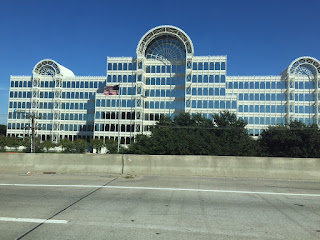 When visiting Dallas last weekend, I had the eerie feeling that I had seen this movie before.  While I have not yet seen any analysis of construction completion schedules and annual absorption rates, I’ve seen enough to be very worried.

So, I was relieved on Monday, when I read that nationwide private commercial nonresidential construction was 1% less than last year, the largest decline in nine months.  Public construction dropped to the lowest level in the last 2.5 years.  I would wish for a larger decrease, except that commercial construction contributed such  a large portion of the 2.9% GDP increase in Q3.

It may be that commercial construction is slowing down because it is getting overbuilt, meaning the rental market is over-supplied with space.  Or, it may be that “cap rates” are rising.  Remember that the value of commercial real estate is largely determined by dividing net-operating-income by the capitalization rate, which normally rises with interest rates (assuming the cost of equity remains constant).  The market believes interest rates will increase next month, and an increasing divisor decreases value.  This is an example of the classic self-correcting mechanisms of capitalism, i.e., too much demand for money to finance construction raises the “cap rate”, which drives down the value of real estate.

I don’t relish another Texas recession, as that hurts our national GDP disproportionately, but will not be surprised if that happens.  More specifically, the same rise in capitalization rates that hurts Texas commercial real estate will hurt such projects nationwide.

A lesson from the past is talking . . . and I’m listening!